Plastic, not fantastic. A comprehensive review on environmental microplastics sampling.

Since its production in the early 1900’s, plastic has become one of, if not the most popular substance in the world being applicable to almost every part of life. Its increase in popularity is staggering, 2 million tons in 1950, to 368 million tons in 2019 and an estimated total production of 9.2 billion tons from 1950’s-2017! (www.plasticsoupfoundation.org)  However, in recent years it has had the spotlight well and truly turned upon it and not because of its magical convenience.

Images of marine wildlife entrapments in fishing nets, ingestion of packaging and vast flotillas such as Great Pacific Garbage Patch of 1.8 trillion plastic pieces, (www.theoceancleanup.com) has awoken public concern to the mismanagement of plastic waste both locally and globally. However, a more hidden concern has been brought to the forefront of scientific literature and the public eye in recent years…the presence of microplastics.

Microplastics (MP) are any plastic particles <5mm and originate from a variety of sources, Primary Microplastics come from raw plastic pellets used in manufacturing and microbeads of polyethylene that are added as exfoliants in health and beauty products. Just one shower alone is thought to send 100,000 microbeads down the drain. Secondary microplastics appear due to degradation of larger plastics in to smaller and smaller pieces or from the shedding of plastic fibers from clothing.

Worryingly microplastics have been observed in some of the world’s most remote regions including mount Everest. (www.sciencenews.org) There is also the pressing issue of their ability to bioaccumulate in aqueous species but also their unintended application to soils through sewage sludge and fertilisers, causing possible phytotoxicity and transfer to the human food chain.

To monitor and quantify microplastics in the biosphere, comprehensive sampling regimes must first be implemented. All environments offer unique challenges and opportunities to understand how these materials behave.

Marine sampling techniques are uniquely different due to different plastics having different fates based upon their physico-chemical properties. Plastics are generally low density and many of the polymers will float in sea water, the density of the given plastic also determines the plastics buoyancy and where in the water column the particle will be. However, bio fouling can also alter the buoyancy of lighter plastics and thus making them sink. This ability to float and move has allowed identification of spatial trends plastic debris to be mapped across the globe showing heavy influences of sub-tropical gyres and their associated oceanic currents.

Marine techniques can be split in to two categories, Bulk sampling and Volume reduced sampling. Bulk sampling consists of collecting a given volume of seawater leaving the extraction of MPs for a laboratory whereas volume-reduced sampling preserves only the portions of the samples that are analysed in a laboratory. These are then sub-split with the most common types being non-discrete and discrete sampling allowing different areas of the water column can be sampled.

Non-discrete sampling devises such as nets and pumps are often used with nets being the most common. These are usually 1.5-4.5 long, ship mounted and allow sampling of the entire water column, as the water flows through the net the sample can be concentrated in a centralised pot. Sample volumes can be measured with a flow meter mounted to the net or be calculated from the opening of the net and the distance traveled. However, nets have some draw backs in that mesh sizes must be chosen appropriately as to not miss smaller particles but not so small that the impede sampling due to fouling and that nets are most commonly produced from PVC which could skew findings.

Discrete sampling equipment is used at specific depths with Niskin and Rosette types being the most common. The Niskin is a manually operated singular tube with weight activated hatches on either end. The tube is lowered to a specified depth on a rope and a messenger weight is then lowered along the rope to hit the trigger to close the tube hatches, sampling water at that specific depth.

The Rosette has multiple electrically operated trigger tubes held within a frame; this is then lowered to very close to the seabed. As the Rosette is retrieved the different sampling tubes can be opened and closed to take samples along the whole water column. One major difference is that the rosette offers the possibility to carry along with it analytical probes to collect environmental data at each depth. These samples are then held in glass storage jars for laboratory analysis or can be filtered on board the research vessel. 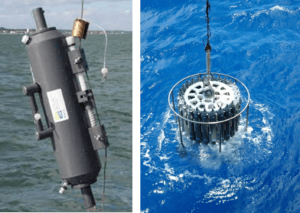 Up until the last 10-15 years freshwater and wastewater microplastics sampling has been somewhat overshadowed by that of the marine environment due to the awareness of macro plastic wastes in the oceans.

There has been increased interest into the implications of microplastics pollution in drinking water sources, freshwater toxicity & bioaccumulation and the impact & efficiency of our wastewater treatment works & sludge handling processes in the release of these pollutants back into the environment, be it by land or to watercourses.

Along with the more obvious primary sources such as microbeads, there are an alarming number of those that the public wouldn’t naturally identify including plastics degradation from road markings and tyre wear, dusts from cities and marine coatings.

Pump systems including remote auto sampling machines are more versatile for those areas that are smaller such as rivers, streams and can be rolled out along a whole network, this includes their use in WwTW. This gives much better spatial resolution of sources of microplastics and how they behave in these environments.

Usually pump systems are used to collect either spot, composite, or diurnal samples of a known volume in replicate to allow for more accurate measurement. However, their application can be married up with the use of filtration systems such as a Spectrum Inox filter housing containing a removable woven 5-10 μm stainless steel cylindrical filter cartridge inside (Wolftechnik, Germany). These allow the suspended solids to be captured and transported to a laboratory knowing that an exact volume of sample has passed through.

In the case of spatial distribution of this type of sampling regime it is important to factor in all those potential sources of microplastics that may make their way into water courses, this includes major highways, industrial areas, storm water outlets and rural areas as potential field blanks.

Figure 3: Spectrum filter and filter housing in use on a wastewater treatment works.

The same premise is important when sampling within water treatment facilities, allowing for capture of samples representative of incoming microplastics and after major treatment steps such as settlement tanks, aerobic & anaerobic biological treatment, filtration, chemical treatment, and sludge handling.

As mentioned previously it is also important to sample after each major treatment step, this includes the sludges produced. Many treatment works have facilities from which to sample sludges using taps on pipework or dedicated HACCP sample points.  Should these not be provided all efforts should be made to alleviate the uses of plastic e.g., Stainless steel trowels, buckets & sample cans with natural fiber rope.

Soils inherently experience very high levels of pollution pressure from anthropogenic activities with soils exhibiting between 4 and 23 times the marine microplastics pollution and as such can experience issues in water holding capacity, pH changes micro/macro biotic activity, and thus can impact upon water stable aggregates.

The continued used and degradation of agricultural fleeces used for mulch in arable farming along with landfill use and illegal dumping all offer major primary pathways for plastics pollution however, some of these pressures are experienced due secondary sources through the drive for a circular economy promoting resource reuse and recycling such as the spreading of sewage sludge derived biosolids as fertilizers to agricultural soils and industrialized composting systems. These inherently allow pathways for microplastics contamination; however, efforts are being made to limit the contamination to soil improvers through quality protocols in Anaerobic digestates and compost production.

Research into the terrestrial environment is much sparser than that of the marine, even though most of the plastic ends up in soils and sediments rather than the oceans. Microplastics found in soils and sediments are seen to be structurally and chemically like those found in aquatic environments with fragmented secondary microplastics and fibers being the dominant shapes which becomes part of a complex mixture of organic matter and mineral elements.

Prolonged decomposition rates due to the lack of abrasive forces seen in the aquatic environment, have seen to allow release of chemicals such as BPA’s, which are known to be hormone disrupters and nano sized particles can cross cellular barriers, this calls in to question the potential of such pollutants through into the food chain.

As mentioned above, there are many different sources of plastic in soils and thus when site selection takes place for sampling the point source contamination, land use and topography all must be taken into consideration as to allow for a true representation of the heterogeneity of the soil environment.

The sampling of soils and sediments are very similar usually 5 × 5cm – 20 x 20cm can be collected using stainless-steel shovels, stainless steel corer or soil auger, Lenz samplers or Van Veen samplers. Depending on the soil and sediment types and adhesion qualities, different corers and screws maybe needed, for example clays are usually very cohesive this a narrower drill allows minimum soil friction resistance, whereas coarse sands and loam may require shielding around the core to allow for soils retention.

Van Veen samplers are usually used in estuarine and marine sediment sampling, where fractions are fine and easily penetrated by the sampler jaws.

Over the past 6 years at Aqua Enviro-SUEZ I have seen a proactive response to issues surrounding emerging contaminants such as microplastics, allowing us to become water industry leaders in water quality sampling and monitoring.

Along with our research partners (UKCEH), we are dedicated to understanding the mechanisms of microplastics pollution and delivering complete sampling and analysis regimes in wastewater, freshwater, and sediments. Our most recent joint venture is a DEFRA commissioned project aiming to look at loads and types of microplastics in surface waters and sediments in two, lower catchment rivers in the greater Manchester area.  This aims to understand the practicalities of and deliver reliable sampling procedures that can be rolled out to adequately monitor and quantify microplastics loads in sediments and river waters of varying catchment locations around the UK.

To find out more about the work we do please get in touch.